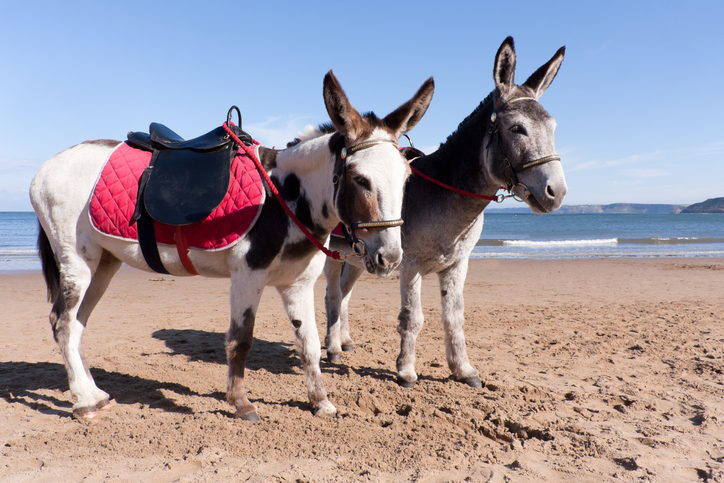 Gloomy donkeys, a game of Scrabble and English church bells

On this day: “Always laugh when you can. It is cheap medicine”.

It not only us humans who are left disappointed by rainy seaside holidays. New research by the University of Portsmouth has shown that donkeys, once a staple of coastal resorts, loathe the wind and rain as much as we do and prefer to huddle indoors as soon as the clouds roll in. Horses on the other hand, are much happier in colder conditions.

It’s all down to ‘the evolutionary history of each species’, Leanne Proops, an equine behaviour expert, told The Daily Telegraph. ‘Horses are thought to have been domesticated in the temperate regions of Eurasia, while domestic donkeys originated from the semi-arid regions of north-east Africa. This means horses tend to be better adapted to the temperate UK climate, whereas donkeys are better suited to hotter, drier climates’.

Turns out there’s a reason for Eeyore’s low-spirits after all!

A pig’s ear of it

Marks and Spencer’s Percy Pig, considered by some as a national treasure, caused no end of controversy this week. In a bid to make all the sweets in the range suitable for vegetarians, the supermarket chain went the whole hog and removed gelatine from the much-loved recipe. Unfortunately this has resulted in a product which by all accounts tastes like ‘washing-up liquid’.

As reported in the Evening Standard, Good Morning Britain host, Piers Morgan, was amongst those to express outrage over the move. He spat the sweet out live on air and ranted ‘leave our pig sweets alone you people’. Others took to Twitter, describing the new sweets as viler ‘than a rotting pig carcass’ or ‘basically inedible’.

Seems like no one’s going to be pigging out on Percy anymore!

Changing with the times

Board game, Scrabble, is following social currents to the letter given the announcement that 2,862 new words reflecting modern society have been added to its official dictionary. Now you can get away with “fatberg”, “manspreading”, “upskirting” and “genderqueer”, (defined as a person with a non-traditional gender identity).

Two-letter words have also been added: “ze”, (a gender neutral pronoun), “ok” and “ew”, (an expression of disgust). Talking to The Daily Telegraph, Philip Nelkon, a four-time national Scrabble champion, suggested this would mean less scrabbling around for high scores. “Two-letter words are the lifeblood of high-score Scrabble. Now, for the first time since 2007, there are three new two-letter words to enhance our firepower.”