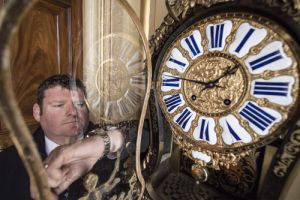 On This Day: ‘Brother, we done deeds of charity;

Between these swelling wrong-incensed peers’.

Where there’s muck, there’s brass
It was gasps all round on the Antiques Roadshow on Sunday as David Rose was told his rubbish tip finds – a top hat and a cigar case - were worth £10,000. They did belong to Winston Churchill though!

Winston gave the items to his cook, who used to write to her son every day detailing the daily goings-on in the Churchill household. And they ended up at the rubbish dump where David had worked for 15 years. Recycling at its best, we say.

Stop all the clocks

The clocks spring forward this Sunday at 2am leaving us all feeling a bit groggy after losing an hour’s sleep. Still, spare a thought for Julian Newman, Blenheim Palace’s official timekeeper.

Julian will have the task of changing all 30 of the palace’s historic clocks including the 18th century East Courtyard Clock Tower, which is twice as old as Big Ben. It’s an early start as “I find it best to do this very early in the morning before the staff arrive as you can easily get tied up with other events and the last thing you want to do is lose track of the time,” he says. Each clock has to be stopped before the time is changed and then started up again, and thanks to old, complex mechanisms it’s tricky work.

Julian, we wish you well!

Such highs, such lows

It may be frustrating, but taking a wrong turn while driving every now and again is pretty much part of the course. Still, even if you’ve left the motorway at the wrong exit or got into the wrong lane, it’s unlikely you’ve ever ended up in the wrong country.

Still in the flew the news this week that British Airways managed just that and a plane destined for Dusseldorf actually ended up 525 miles off course in Edinburgh. ‘How?’ the disorientated passengers cried. Apparently the flight plan, which dictates an aircraft’s route was incorrectly filled in and the crew had been blindly following it. Sadly the fact that they hadn’t crossed the sea and were cruising over the Peak District at 27,000 ft didn’t ring any alarm bells. Oops.

Perhaps the biggest exhibition of the year opened this week. Van Gough and Britain promises to be a vivid, vibrant and refreshing show shedding a new perspective on Vincent’s masterpieces exploring for the first time the profound influence Britain had not just on his work but his actual decision to be an artist, too.

Of course the press have already been in with Rachel Campbell-Johnston for The Times giving the exhibition the full five stars. It’s in two halves: the first explores Vincent’s reaction to Britain and how he submerged himself in the cultural life of the day here while the second half explores British artist’s response to Van Gough.

Busy it will be. ‘Last tim a big Van Gough show was staged in this country, the gallery floor underwent three years’ wear and tear in barely five weeks’, says Rachel. Her advice? ‘Dash in as soon as the doors open, head straight for the bench in the third gallery. Plonk yourself down and stargaze’.

The EY Exhibition: Van Gough and Britain runs until August 11 at Tate Britain

This week The Temple Church in London dedicated Wednesday’s choral Evensong to a special service; one ‘to acknowledge Brexit and its Challenges’ with a special sermon by the Lord Judge of Draycote, former Lord Chief Justice of England and Wales.

It’s part of a pattern we’ve seen this week for Brexit to crop up in unexpected places and affect our lives in unexpected ways. The Museum of London for instance has even created a Brexit bus to tour the capital, collecting stories that reflect these times.

Perhaps the most entertaining are the Brexit parties set to happen tonight (March 29) to mark what was to be departure day. Whichever side you’re on there’s one for you from ‘Pussy Liquor’s Wake Me Up Before EU Go-Go’ to ‘Goodbye Europe! The Brexit Leaving Drinks’ – who are aiming to play music so loud, they’ll be able to hear it in Calais.

As Time Out so cleverly put it: whether you’re in, out, in, out, at least we can shake it all about together!

Good booze news came in last Friday with the announcement that Britain’s booming wine industry is set to create up to 30,000 extra jobs over the next 20 years according to experts. As reported in the Daily Express, output from the UK’s 500 vineyards and 165 wineries is growing rapidly as demand increases.

No sour grapes there then.