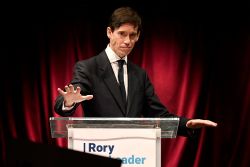 And in the news this week . . . the boyband Tory party, Alexa the saviour and another reason not to feed pigeons.

Everybody knows not to feed a pigeon but even so, in a moment of abandonment, one just might.

So imagine Sally-Ann-Fricker’s shock when after feeding a piece of her sausage roll to a pigeon she was fined £150. Her crime? Throwing a “substantial” amount of food on the ground – said the enforcement officer from Bath and East Somerset Council.

“This was absolutely ridiculous. We were very upset and very shocked,” her daughter Ms Bradley told the BBC. “My mum’s a carer and the fine is more money than she gets in a week.”

Councillor Dave Wood said: “Councils and their contractors should use common sense … I have asked officers to urgently look into this matter and review the action taken with the contractor, to determine whether it was proportionate.”

Thought digital assistant, Alexa, was only good for telling you the weather? Well it turns out that there’s a saintly side to the smart speaker.

As reported in The Times, researchers have developed technology that allows Alexa to recognise the gasping breaths of a person suffering from cardiac arrest and could be set to alert anyone nearby with CPR skills or to call the emergency services.

‘It’s a sort of guttural, gasping noise [that a victim experiences]’, says Dr Jacob Sunshine, ‘and its uniqueness makes it a good audio biomarker’.

So with Alexa in the house, we can all breathe easy!

Last of the big spenders?

Forget the young ones. It seems it’s pensioners who really know how to party.

According to The Telegraph, the older generation spend more on ‘fun’ than their predecessors and today’s young people – £100 more a week in fact on alcohol and eating out.

David Willetts, ex-Tory Minister and President of the think tank that led the study said: “The big living standards gains that each generation used to enjoy over their predecessors have stalled” with younger Brits unable to spend as freely on non-essentials.

Still with the older generation facing increased care costs there are clearly generational challenges on both sides.

You can leave your tie on

While Mr Stewart’s unorthodox stool-sitting style drew some comments, it was the removal of his tie mid-way through the Tory leadership debate that really got people talking.

‘I thought maybe if I took my tie off we could get back to a bit of reality,’ he said afterwards. ‘I was beginning to feel on those strange BBC white bar stools that we were moving off into an alternate reality’.

He’s not the only one who struggled with those bar stools. One viewer was prompted to say ‘Westlife are looking rough these days’. Yes, there was something rather boyband-esque about it, wasn’t there?