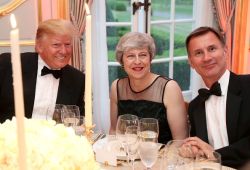 And in the news this week: Jeremy Hunt’s secret weapon, a curious case of mistaken identity and unicorns (the kind that actually exist)

But no, we’re not talking about the equine kind.

In the tech sector, ‘unicorns’ are known as companies worth more than $1 billion dollars and over the past two decades UK-based entrepreneurs have built 72 such companies – 13 in the past year alone. That compares to 29 in Germany, Britain’s closest European rival, and India with 26.

Only the US and China, who have created a whopping 703 and 206 respectively, have overtaken us, and with tech business widely regarded as being less exposed to political uncertainties than companies in other industries, we’re set to keep galloping ahead. Hurrah!

‘She was born and raised in Devon, is the face of Wimbledon and has been honoured with both an MBE and an OBE. In fact, it’s hard to think of anymore more British than Sue Barker’, wrote Matthew Moore this week in The Times.

Yet the former tennis star is actually Australian – if the French Open trophy is to be believed – owing to an engraver’s blunder who wrote ‘AUST’ rather than ‘GB’ next to Barker’s name.

The mistake has remained undetected for more than four decades and is now set to be corrected. Better late than never, eh?

In an interview for The Times Red Box podcast, Hunt shares that he has had several recent conversations with the President about how to harness the power of social media and also received tips on how to use Twitter to mobilise support.

During his state visit President Trump repeatedly praised Mr Hunt, saying: ‘I know Jeremy – I think he would do a very good job’ – an endorsement that, given its timing, might ruffle some other blue feathers! Wasn’t Boris his favourite?

In the dog house

One pooch who’s certainly earned his keep this week is Sajid Javid’s spaniel-poodle cross, Bailey. The adorable fluff ball is a star in the Home Secretary’s campaign video, released this week, merrily nosing a ball about the Javid family kitchen oblivious to his electoral charm. Aww.

Not every doggie’s had a good day though. As reported in the Metro, metal detectorist Gary Smith dug up a 600-year-old ring worth £1,000 in a field only to lose it throwing a stick for his dog, Ben. Poor Ben. Until then he hadn’t put a paw wrong!