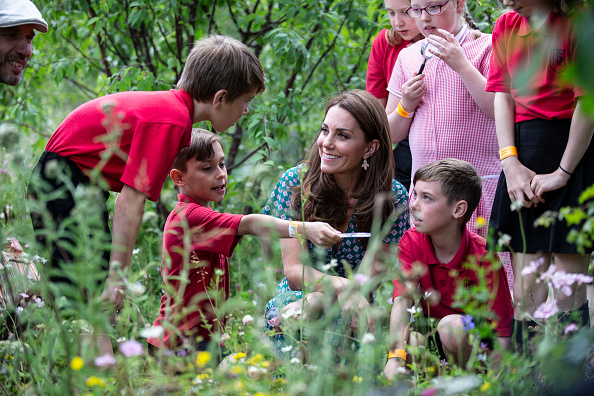 And in the news this week . . . record-breaking sailors, an endangered rite of passage and a garden in bloom.

The Duchess of Cambridge visited her garden at the Hampton Court Flower Festival on Monday this week with children from Hampton Hill junior school.

The Back to Nature Garden was co-designed by the Duchess with Andree Davies and Adam White and features rustic dens, a bee-friendly meadow and a pond where youngsters can paddle. It was transferred from the Chelsea Flower Show but has been developed further for Hampton Court and is now double the size. Kensington Palace previously said it hoped the garden would ‘inspire families to get outside and enjoy nature together’.

End of the exchange?

Having a French pen-pal and heading off to pastures red, white and blue for an exchange trip was once a rite of passage for school pupils. Who can forget struggling to understand anything being said at dinner, learning to smoke Gitanes cigarettes or even managing to survive one’s first kiss?

Still according to Vicky Gough, schools advisor to the British Council, the French exchange could soon be no more. As reported in The Telegraph, sending children on exchanges has “fallen out of fashion” in part due to the “safeguarding culture” and Government red tape with the percentage of secondaries offering such trips falling from 30% in 2014 to 25% today.

As an ode to the idea, William Sitwell, amongst others, shared his experience with The Telegraph: ‘Towards the end of dinner, I was asked if I’d had enough. I was full and replied: “Je suis plein.” For the family to learn that . . . their English male guest was pregnant was enough drama for one evening’.

Company bosses have started confiscating their employees’ smartphones in a bid to keep their noses to the grindstone, The Times revealed this week, with managers arguing that they cannot trust people not to get distracted by social media.

Gerald O’Shaughnessy of Business Marketing Services in Cleckheaton said that he felt so aggrieved by people using phones during working hours that he confiscated them until lunchtime and another director declared he recently ruled out recruiting candidates who would not hand over their mobile devices.

Safe to say all this has pushed the buttons of the younger generation. ‘We’ve had girls have meltdowns when they’ve been told they need to put their phone in a box. Others have said it’s almost breaching their human rights’, Mr O’Shaughnessy told The Times. ‘It’s almost like separation anxiety’!

Whatever floats your boat . . .

It was a voyage planned in a pub that pushed two men to the edge, but Rich Mitchell and Will Hodshon have broken the record for sailing around Britain – and done it in a 60-year-old dinghy.

Taking it in turns to sail and sleep on the cramped 16ft boat, Nipegegi, a wooden Wayfarer dinghy bought in 1959, the pair travelled 1,500 nautical miles around Britain’s coastline without stopping. It took them 15 days and four hours, smashing the former record of 32 days in a similar craft.

With gales that threatened to capsize the boat, sleep deprivation and hallucinations, the sailors said they had completely underestimated the danger of the trip. Mr Hodshon from Bath said, ‘Although a lot of that trip was amazing, quite a lot of it was misery and suffering’.

Clearly these two are more than fair-weather friends!

Last weekend, (June 29-30), the village of Caston in Norfolk held a rather unusual festival. The Nostalgia with Petal and Purl festival saw the town dotted with various life-sized knitted figures from the year 1953. There was the Queen at her Coronation, a knitted congregation ready for a service and even a man mowing the lawn!

The figures were made by crafters in the local area. Some visitors even dressed in 1950s style for the occasion and ticket sales raised money for community projects. Bravo!