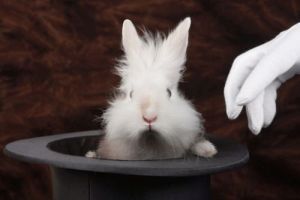 Flags on the moon, horse-racing comics and the rise of the female magician

By hook or by crook

"That's one small step for a man, one giant leap for mankind”, said Neil Armstrong famously when he stepped down onto the moon in 1969.

But it wasn’t just the US flag that made it onto the moon’s cratered surface that day. British engineer Keith Wright revealed this week that thanks to his quick thinking the Union Jack is on there too.

As reported in The Telegraph, Keith told ‘The One Show’ on BBC One that while he was working on tests at the Kennedy Space Centre for the 1969 Apollo 11 mission, Neil Armstrong and Buzz Aldrin came to the facility for a run-through. He got the chance to sign the brackets that held the solar panels which were taken on the mission and left on the moon: ‘I signed my name and I thought, well, I’ll put ‘UK’. Then I thought, I’ll draw a little Union flag”.

Well done Keith – it’s nice to give us Brits a bit of credit!

Champion racehorses such as Red Rum and Desert Orchid have been immortalised in sculptures and stories, but never before in a comic – until now.

In a bid to woo a younger audience into horse racing and compete with other sports that vie for attention, The Jockey Club has commissioned Marvel to create a comic book in time for the Grand National this weekend. It will feature reality television celebrities from popular shows such as ‘Made in Chelsea’ and ‘Love Island’ and even her Majesty the Queen will appear alongside one of her prized horses, Estimate.

Talking to The Telegraph, Paul Fisher, chief executive of Jockey Club Racecourses said, “Working with some of the best artists to immortalise British racing’s greatest stars in comic book form will hopefully appeal to our sport’s existing fans and inspire new ones including youngsters to experience the thrill of racing themselves”. On to a winner, we say!

It’s not just the home of pasties, Poldark and the cream tea. A new report has shown that the southwest of England is fast becoming the last bastion of desire for Mozart, Mahler and other giants of the classical music world.

As reported in The Times, The Royal Philharmonic Orchestra (RPO) used YouGov data to conclude that while classical or orchestral music is still the most popular in the country (hurrah!), ‘it was in the southwest that interest in the historical repertoire was strongest’. Elsewhere people are becoming far more interested in orchestral treatments of music from films and computer games.

As pointed out by Jack Malvern in The Times, ‘as recently as 30 years ago the presence of a woman on stage at a magic show usually ended with her being put in a box and sawn in half’. But now, word on the street is that the number of female magicians is on the rise, with figures released by the International Magicians Society showing a 35% increase in female membership.

It seems the only things that has worked its magic here is time. When magician Mandy Murden, a semi-finalist on last year’s ‘Britain’s Got Talent’, first joined The Magic Circle it was a bit of a closed shop. ‘You would go to a table [where magicians were showing their tricks] and they’d all stop until you went away. Some of the reasons they didn’t want us in was because we [supposedly] talk too much and we wouldn’t be able to keep secrets.’ Charming!