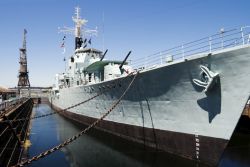 William Shakespeare is baptised in Stratford-Upon-Avon, 1564.

News that the Scottish Maritime Museum is to refer to ships as ‘it’ rather than ‘she’ to appear more gender neutral, has left one of our ex-Sea Lords raging.

Admiral Lord Alan West called the proposal “political correctness gone mad”, when he spoke to BBC Radio 4, adding “it’s a sort of insult to generations of sailors – the ships are seen almost as a mother to preserve us from the dangers of the sea and from the violence of the enemy. To change it in this trite fashion is absolutely stupid”.

The Maritime Museum made the decision after vandals scratched out references to ships as ‘she’ on information boards. Here’s hoping the idea sinks without trace!

A taste of the absurd

Transport for London have had to ban their own Wimbledon advertisements depicting strawberries and cream following its own rules targeting junk food. As well as burgers and sweets, the ban also includes any food that is high in salt, sugar and fat – such as cream.

As reported in The Telegraph, the new measures, endorsed by Sadiq Khan, have meant that seemingly innocuous foods have to be banned from adverts, according to documents revealed by The Spectator under the Freedom of Information Act. This even extends to TFL redesigning a Christmas advertisement for Time Out last year because they thought the moon in the image looked too much like a Christmas pudding! Oh dear.

As related by Jack Blackburn in The Times Diary on Tuesday, it appears that George VI was thankful to Winston Churchill for his services in more ways than one.

‘An email that was recently circulated at the Chelsea Arts Club tells of a Buckingham Palace dinner during the war at which a number of Allied commanders were guests. After the meal the King spotted an American general pocketing some of the silver. Churchill assured the King that he would put a stop to this. He grabbed a large serving spoon, indiscreetly secreted it in his breast pocket, approached the Yank and whispered quietly: “It’s no good, general, they’re on to us. We’ll have to give the stuff back.”’

The Church of England confirmed that the feast of St George, will fall on April 29 this year, not on the usual date of April 23, because of a clash with Easter. As reported in The Times, ‘church rules state that no other festival days should be marked during the week either side of Easter Sunday, which is a moveable date. If a saint’s day falls within this period it is moved to the following week.

If only someone had let our politicians know. While the Labour Party initially tweeted on the 22nd and promptly took it down again after a right old mocking, Jeremy Corbyn did get what he thought was the correct date posting ‘Happy St George’s Day to everyone celebrating in England and across the world’ on the 23rd when the prime minister also tweeted her ‘warmest wishes to all celebrating’. Still, if this means two parties for St George rather than one, what’s not to celebrate?

Extinction Rebellion’s efforts have not gone in vain in London this week as we receive news that ‘Lambeth council has begun using shire horses to tend to its parks, evoking images of 18th-century life’, from the Telegraph.

Horses, Murdoch and Joey have been deployed to rake over sections of Clapham Common in south-west London so wildflower seeds can be planted. It is hoped that reverting to using animals rather than tractors will cut emissions.  Neigh to go!