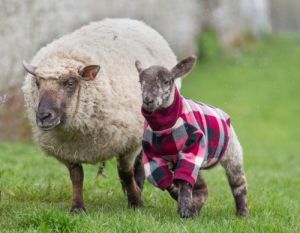 Lambs in jumpers, the Isles of Scilly and the nation’s favourite sitcom

On This Day: “Ignorance is ignorance, not a licence to believe what we like.”

Philosopher, Bryan Magee who was born in London, 1930

Lambing season is well and truly with us and the fields are alive with the sound of bleating. Every year farmers lose countless lambs to foxes, but Gwenan Jones has found the answer; at her farm on the South Downs near Petworth, she’s kitted her lambs out in brightly coloured jumpers which is proving enough of a deterrent – she hasn’t lost a lamb to a fox since.

“Foxes hunt largely by scent and the smell of the detergent along with the brightly-coloured jumpers really throws them”, Gwenan told The Telegraph and the repurposed outfits also keep the new-born lambs warm too.

It’s disputed whether the smell of the freshly washed jumpers is keeping the foxes away with Trevor Williams, founder of The Fox Project, saying “If they see prey and it’s undefended then the scent doesn’t come into it. But you can actually undermine fox behaviour by doing very small things so it seems to me quite possible something like colourful jumpers may work.” Smashing.

Rather than being obscured by cloud, the Isles of Scilly’s typically good weather is being hidden from view by another force of nature – the BBC’s weather forecasters.

News came in this week that West Country tourism bosses are fed up with BBC presenters standing on the left hand side of the screen, blocking West Cornwall and the Isles of Scilly from view.

“I would just like them to stand back a bit”, said Malcolm Bell, chief executive of Visit Cornwall, to The Times. “The Isles of Scilly are small and precious and we need to keep awareness up about them. Standing right in front of them doesn’t help at all”.

This week tourism chiefs met the broadcaster to try to solve the problem. Let’s hope things brighten up between them!

King of the sitcom

Fawlty Towers has been named Britain’s favourite sitcom in a list compiled for the Radio Times by 42 “comedy experts” including Richard Curtis and Sir Michael Parkinson.

Other comedies to feature in the list were other old favourites such as Only Fools and Horses, Blackadder and Father Ted with Detectorists the only comedy made recently to feature in the top 20. Radio Times TV editor, Alison Graham said: "In our memories, great comedies are pearls that become more burnished and beautiful through the years. Absence really does make the heart grow fonder."